…is a slogan used by the global climate justice movement. So if you feel connected to this slogan and stand up for a socio-environmental transformation of our economy and our society, you are basically part of the movement.

… is also the name for our Austrian climate justice movment. We are made up of a multitude of activists and initiatives working together in a decentralised manner across Austria. Our aim is to counter the “business as usual”, resist destructive projects – like the Vienna airport expansion – and to bring about concrete solutions based on solidarity that will help solve our global climate crisis. 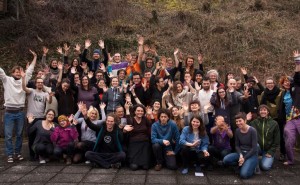 It has been our aim since to show that climate change is not an isolated issue but rather a crisis that interlinks with the economy and our way of living and thus socio-environmental change is needed in every sector of our lives; agriculture, energy, transport, employment and so on.

This change needs a profound discussion and the engagement of the better part of Austria’s civil society: “To change everything, we need everyone”. More than 120 associations, organisations and initiatives support our position paper “System Change, not Climate Change!”. Four big climate marches were organized by us on the global action days before the COP 21 (28/29th November 2015). Two regional groups of activists formed during the preparations for those actions, two joined later: We have now Vienna, Graz, Salzburg and Carinthia. They are still committed to the cause and meet regularly. Our movement is based on grassroots democracy and consensus decision making. We are organized in regional groups as well as working and content groups, operating both decentrally and Austrian-wide. We link up with other initiatives, support emancipatory groups, organize campaigns and do educational work.

We aim to identify the roots of our current climate crisis and uproot them, denounce pseudo-solutions (like emission trading or the belief in technological miracles) and advocate real alternatives to the status quo. We want to pioneer the transition to a socio-environmental society. This includes a transformation to an economy that is not based on profit and endless growth, but one that respects ecological limits and enables a “good life” for everyone. We speak up for climate justice, thus we show solidarity with those who are affected the most by a changing climate and unjust global economic policies while at the same time being the least responsible for human induced climate change.