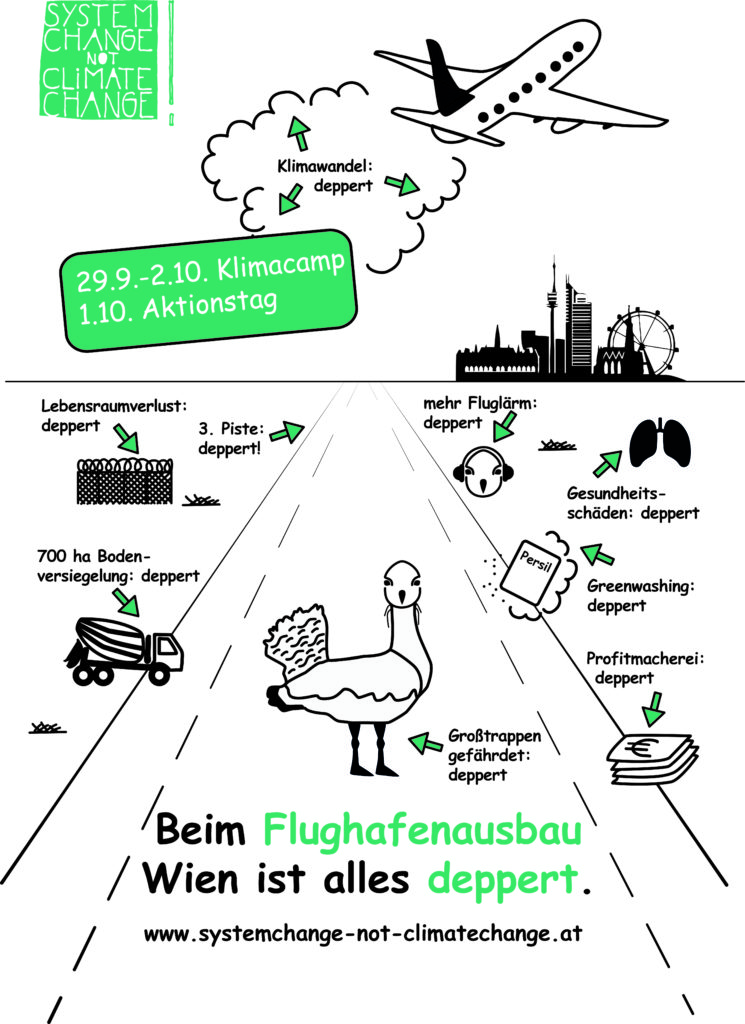 NO EXPANSION OF THE VIENNA AIRPORT.

FOR A FUTURE-ORIENTED MOBILITY.

For more than 10 years there is resistance against the plans to massively expand the Vienna Airport (Wien-Schwechat) [1]. Civil society supporting this position paper declares a distinct NO to the construction of a 3rd runway as well as to an expansion of the terminals. It is untenable in times of acute climate change and ecological crisis to invest in infrastructure mega-projects that are guided solely by financial interests instead of a future worth living.

Here is why we reject the expansion plans:

Stopping the construction of the 3rd runway at Schwechat is absolutely necessary if Austria is serious about the Paris climate change agreement it signed in December 2015. It is only possible to prevent serious climate change and to limit global warming to 1.5 to 2 degrees if a socio-ecological change of our society and economy takes place NOW – especially in the area of mobility. Air traffic is the strongest growing and most harmful part of the transportation sector, both in Austria and the world.[2]. According to the expansion plans, the third runway is meant to serve the further increase in air traffic and Schwechat is supposed to turn into an aviation transfer-hub . As a result, the greenhouse gas emissions associated with Schwechat would increase 2 to 3 times when comparing the base year 2003 to 2025 [3]. The CO2 emissions from aviation have a particularly negative impact on the climate due to the altitude of airplanes. There are also other substances that are harmful to the environment and the climate that are connected to aviation. [4] [/toggle]

About 760 hectares are required for the proposed expansion [5]. Just under 200 hectares would be sealed with concrete and asphalt by building the new runway as well as new gates and space for planes to park and manoeuvre. This is the same area as 8 times the Viennese ring road [6]. In addition, 20 hectares of forest as well as dry grassland and conservation areas featuring endangered great bustards and ground squirrels are to be cut down and destroyed [7]. The proposed illusory pseudo-solution for this destruction is to “recreate” the habitat elsewhere [8]. However, natural habitats are not the same everywhere. Instead of this controversial trading of indulgences for the destruction of nature, this sort of infrastructure that is neither necessary nor sustainable should not be built in the first place.[/toggle]

[toggle title=“… prevents agriculture in close proximity to the city.“]

Several hundred hectares of agricultural land would be destroyed by building the third runway [9]. This is particularly worrying because already today about 20 hectares of land are being sealed each day – this is equal to about 28 football fields! This is happening although we know that regional agriculture in close proximity to cities is vital for a forward-looking food supply that requires minimal fossil fuels[10].[/toggle]

The airport is located in the immediate vicinity of a densely populated area. The 3rd runway would direct its air traffic precisely across the conurbations of Vienna’s metropolitan area. At least 350,000 people are directly affected. The airport forecasts an increase from the current (2013) 240,000 flight movements to 460,000 in 2030, which equals to one take-off and landing every minute. Noise, especially at night, as well as air pollution caused by nitrogen oxides and particulate matter (fine dust), cause physical and mental health damage [11].[/toggle]

Air traffic is only a profitable business because all of the external costs are outsourced to society – such as health damage, climate change and the destruction of nature. At the same time, the aviation industry benefits from a number of tax relief measures: the FWAG (the stock company that owns the airport: Flughafen Wien Aktiengesellschaft) does not have to pay real estate tax, flight tax is very low, foreign flights are exempt from sales tax and kerosene is exempt from mineral oil tax. 38% of the airport are owned by an Australian pension fund (Airports Group Europe S.à r.l.)  [12], and the insolvency risk of FWAG will be passed on to taxpayers because the FWAG can not be allowed to go bankrupt if the projected passenger volume does not occur.

THEREFORE WE ARE COMMITTED TO…

[toggle title=“… the immediate stop of the construction planning.“]

The approval process should be objective, factual, transparent and democratic. The environmental impact assessment must take the negative impacts into account seriously. Nowadays, infrastructure that is massively heating the climate should not be built, because it determines the development for the next decades.

[toggle title=“… a reduction of air traffic rather than greenwashing.“]

Not only the airport of Vienna wants to grow. Hundreds of new airports or extensions are planned worldwide [13]. The UN aviation organization ICAO expects a 3 to 7-fold increase in emissions caused by aviation by 2050. Nevertheless, the ICAO claims to be able to shape the growth as „climate neutral“ as soon as possible: CO2 emissions are supposed to be compensated elsewhere by means of CO2 compensation projects (offsets). This illusion is absurd and highly problematic [14]. Instead, we need fewer flights. This should be achieved by the following measures: abolition of the tax exemption of kerosene and the tax exemption of real estate tax for airports, as well as, in particular, the subjection of flights and ancillary services to sales tax (like any other consumption good), the prohibitions for night flying and no further subsidization of aircraft and airport construction by means of public funds – which, in turn, are missing the development of forward-looking and accessible mobility solutions. In addition to this the principle of “emitter pays” should be applied: in this case the airport should pay for the damage caused by the pollution that air travel is responsible for.[/toggle]

We need an environmentally friendly and affordable mobility. This includes a well-developed and attractive network of public transport and a shift of short and medium-haul flights to the railway sector [15]. It also calls for questioning our mobility and thinking about alternatives, e.g. replacing business travels by video conferencing.

More and more goods are transported by airplanes worldwide [16]. Global trade should be restricted to the absolutely essential which should be transported predominantly by environmentally-friendly alternatives to aviation. We need an economy based on short distances. In order to achieve this, we advocate the promotion of the most local production, distribution and consumption of products and services, which are based on the basic needs of the people.

Although only about 3-7% of the world’s population flies, the effects of climate change are perceptible to all and unjustly mainly to people in the Global South who fly very little [17]. The resource-intensive lifestyle of a growing middle and upper class must not further burden societies that suffer most from the depletion of nature and from climate change and have historically contributed least.
The significant reduction of greenhouse gas emissions must be carried out in Austria itself, and should not be outsourced to the global South by compensation mechanisms (offsets, emissions trading) and questionable projects.

[1] In 2007, the Flughafen Wien AG – as applicant for the project of a third runway at Vienna International Airport – published their environmental impact statement. It met more than 1000 objections from neighbours and citizens’ initiatives. Still, in early 2012 the provincial government of Lower Austria ruled in favour of the airport’s expansion. Neighbours and citizens’ initiatives appealed to the “Umweltsenat” and later to the Federal Administrative Court. The decision from the court of appeal is expected anytime (2017).

[4] In addition to CO2, aeroplanes emit a range of harmful substances into the atmosphere: Nitrogen dioxides, Carbon monoxide, Black carbon, Organic carbon and other aerosols. The emitted aerosols and vapour become contrails, who in turn contribute to cirrus cloud formation. These factors have a potentially strong influence on the climate.

[13] In emerging countries and countries of the „periphery“ the western style of mobility (including its damaging consequences for the environment) is spreading as well. In China alone, 50 airports were built between 2006 and 2015. But the expansion of our fossil-fuel-based transport industry starts to exceed the planetary boundaries. http://www.handelsblatt.com/unternehmen/handel-konsumgueter/peking-baut-mega-infrastruktur-china-klotzt-mit-neuen-riesen-airports/11366142.html

[16] In 2014, airlines transported 51,3 metric tons of goods, equivalent to more than 35 % of the globally traded merchandise value. 9% of airline revenues are generated from cargo business. See: http://www.iata.org/whatwedo/cargo/pages/index.aspx