Vienna, 11 December – For more than three months, construction sites of a planned urban highway in the Austrian capital Vienna have been occupied by hundreds of climate activists. Yesterday, several people connected to the protests received letters from a law office in the name of the City of Vienna threatening them with lawsuits for excessive compensation of ‘damages’. Only one day earlier, the activists were threatened with eviction. The organisations Jugendrat (Youth Council), System Change not Climate Change and Extinction Rebellion as well as Fridays for Future, in which several of the concerned activists are active, condemn the ruthless moves by the City Council to silence the peaceful protest. The activists demand the immediate withdrawal of all threats of legal action and the cancellation of the urban highway. 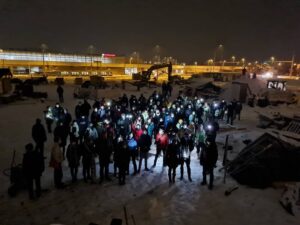 The Vienna Social Democrats (SPÖ Vienna), party of Vienna’s mayor Michal Ludwig, are pushing for several highway construction projects. „Mayor Ludwig wants to silence us with these scandalous threats! But the City of Vienna is causing the actual damage. With its climate-destructive plans Ludwig fuels climate breakdown and threatens our future. We are the ones who will have to bear these damages,“ says Lucia Steinwender from System Change not Climate Change.

The plans for the urban highway are connected to the recently cancelled highway („Lobau-Autobahn“) on the edge of the city, which threatened the Lobau alluvial forest, part of National Park Donau-Auen. The plans included a tunnel underneath the national park. Therefore, the movement is called #LobauBleibt (Lobau stays). The protests have drawn many thousands of people and made headlines in Austria since last summer. Only last week, Environment Minister Leonore Gewessler (Greens) cancelled the Lobau-Autobahn. The Mayor of Vienna also announced legal steps against Gewessler’s decision and wants to proceed with both highway projects. “As long as the urban highway is not cancelled, the National Park will not be safe. The highway plans also contradict the city’s own climate targets,” says Lucia Steinwender.

Yesterday, letters with legal threats of ‘damages’ were sent by letter to several private addresses. „The City of Vienna tries to silence people who fight for a climate-just future with threats of legal action,” said Lena Schilling from Jugendrat. „Our generation can no longer afford climate-damaging projects like this highway. It’s the politicians who push for them who cause the real damage. That’s why we have to stand up to the destruction here where it happens. We have no other choice.“

Jugendrat, System Change not Climate Change and Extinction Rebellion demand that the City of Vienna immediately withdraws the threats of legal action. The city must refrain from any legal action against legitimate protest. Protest camp and occupations will continue until the urban highway is also cancelled.