Before today’s amendment to the road traffic regulations in the National Council, pedestrians by adequate distance illustrate how much space cars take up in public – more precisely, by putting on  wooden frames that correspond to the dimensions of cars – space that the pedestrians and cyclists would actually need in order to get around safely. Cars occupy 67% of the traffic space in Vienna, ¼ of all journeys are car rides. This injustice further escalates in the corona crisis and becomes a health risk. 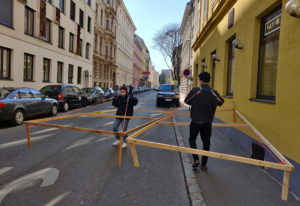 How to pass other pedestrians in a distance of one meter on a sidewalk which is 1.5m-2m wide? A mystery. „Either Ludwig, with his veto against the required conversion of streets into encounter zones, deliberately disregards the requirements of maintaining one meter of distance and thus risks the health of other Viennese citizens, or he knows a magic trick that he has been hiding so far,“ says Luise Bacher, spokeswoman of the action group for climate justice ‚System Change, not Climate Change!‘. “Corona-safe everyday pedestrian mobility requires either at least 3.5m wide sidewalks on each side of the street, or the conversion of streets into encounter zones in order to create more alternative space,” Bacher argues.

In addition to the enormous space cars claim, street noise, particularly on main roads, continues to exacerbate the residents of so-called Grätzl (blocks, courtyards and parks as parts of districts). who have already been burdened by exit restrictions. Everyone who just goes outdoors for regeneration or seeking peace of mind will only have a few places left to go that are very crowded because of the lack of alternatives. For 42% of the households in Vienna who do not have a car as well as for car owners who walk, the dominance of cars in public spaces does not lead to protection against the virus – rather, it further increases the risk of infection in the streets.

‚System Change, not Climate Change!‘ is therefore – as in pre-corona times – committed to advocate for a good life for everyone and a radical change in mobility. Grätzl should enable noise-free and corona-safe stays outdoors that would become communal spaces after the corona crisis. To that effect, the expansion of encounter zones and the pushing back of the “systemic of cars”, which is supported by the car lobby and the car-party SPÖ, is absolutely fundamental.

Press release: Change of the Austrian road traffic regulations – ‘corona-safe’ mobility not only for the drivers!