Since spring 2016, our climate justice movement „System Change, not Climate Change!“ is devoted to strengthening the topic of air traffic – a form of mobility that is both detrimental for the climate and socially very exclusive.

A variety of reasons led to this movement:

1. Resistance to the expansion of Vienna’s Schwechat Airport 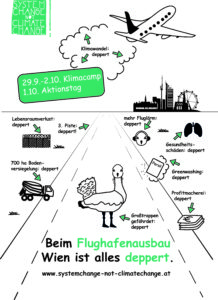 The planned construction of a third runway is absolutely unacceptable from a climate perspective. Increasing the number of flights would make the greenhouse gas emissions grow immensely – putting hundreds of hectares of land under threat of being sealed. For years, groups of citizens have been putting effort into fighting against the increase in aircraft noise. The third runway’s flight routes would overfly the densely populated areas. Therefore, „System Change, not Climate Change!“ is committed to stop the construction plans, and aims towards a forward-looking type of mobility.

We invite individuals, initiatives, organizations and societies to support and spread the position paper against the 3rd runway.

On Saturday, October 1st, we are organizing a day of action against the airport expansion. The first Austrian Climate Camp will take place in Vienna from September 29th to October 2nd! Save the date! Detailed information will soon be available online.

2. Transnational networking with groups campaigning against airport expansion and construction:

We are i. a. in contact with groups that resist the construction on Heathrow Airport (London) and northern France (Notre Dame de Landes). Resistance to airport expansion projects can be seen also in Istanbul, Berlin, Mexico City, Australia etc. Global and coordinated action weeks are planned for the end of September. An available e-mail list is linking these initiatives. Those who wish to join this list, know local groups or want to be involved actively in the networking, please contact us. Contact: norunway3@systemchange-not-climatechange.at

3. We are committed to a reduction instead of so-called greenwashing of the aviation industry.

By 2050, the International Civil Aviation Organization (ICAO) predicts a 3- to 7-fold increase in emission caused by aviation. Nevertheless, as ICAO claims, it should soon be possible to make the growth „carbon neutral“: The additional emissions are to be compensated elsewhere through carbon offsets. This illusory solution is absurd and highly problematic. Instead of this, we need fewer flights. „System Change, not Climate Change!“ is therefore actively involved in a global flight campaign and calls for the petition supporting “No aviation growth! No false climate solutions!” 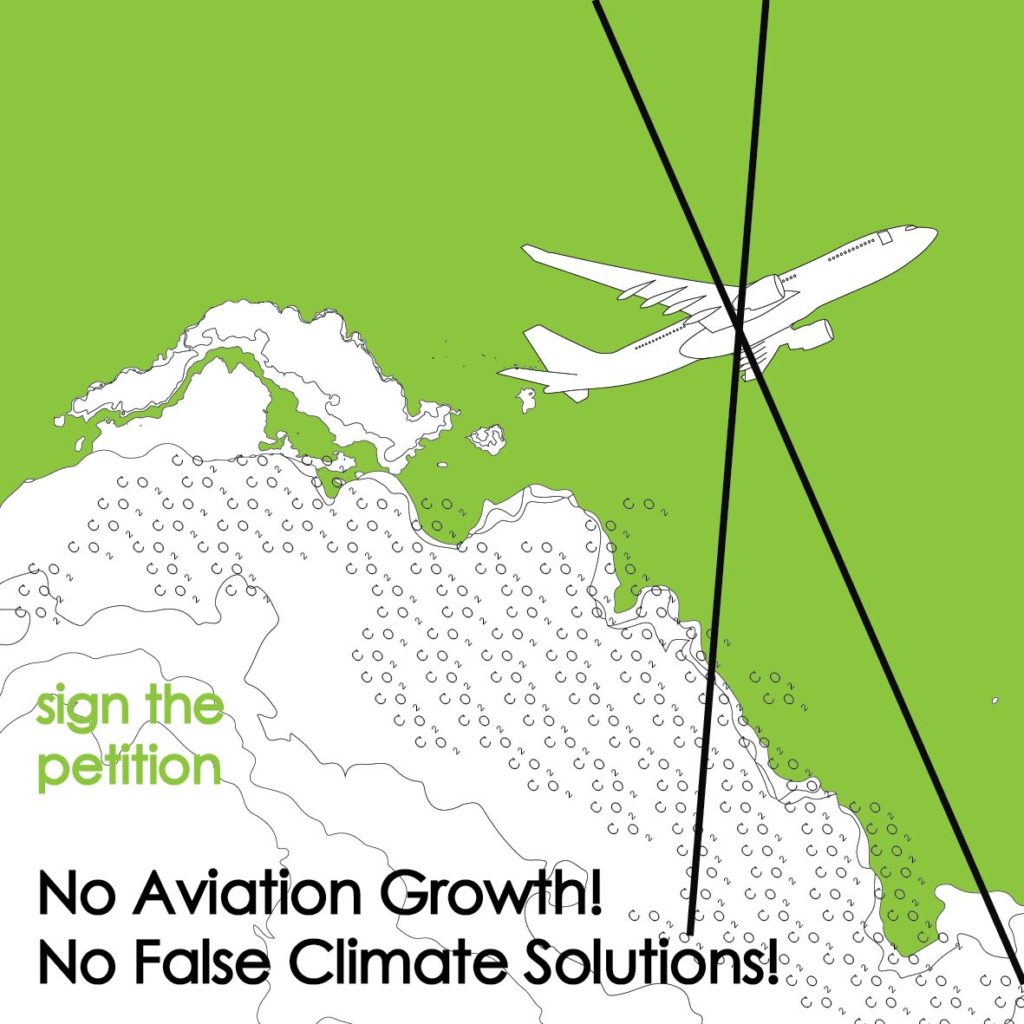